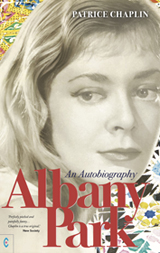 Sensual, vivid and sometimes shocking, Albany Park is the story of Patrice Chaplin’s youthful years: from a grey wartime childhood to exhilarating and dangerous adventures in Europe and an romantic infatuation that came about in a sun-drenched Catalonian city.

Patrice and Beryl, teenagers in the 1950s, live in Albany Park, a London suburb. Life is full of make-up, boys, trad jazz and Soho nightclubs; dreams are of Hollywood. Leaving behind dead-end jobs, they hitchhike across Spain, dressed in the alternative street fashions of the day: white lipstick, dangle earrings, drainpipe trousers. Their path leads to the ancient city of Girona and the charismatic poet, José Tarres. For Patrice it is a homecoming – a rebirth that will mark the end of a friendship and the beginning of a lifetime’s obsession.

Patrice is enchanted by José, but there are shadows on the sunlit days – a possessive mother, mysterious absences, rumours of women and whispers of espionage. With plans to elope seemingly aborted, she finds herself alone in Paris, taking work as a showgirl, arrested as a vagrant and escaping unwanted sexual advances. Only years later, returning to Girona as a writer, does she finally learn the truth about the enigmatic José, the first and true passion of her life.

‘Surging intensity that keeps the reader glued to the page – On the Road, European style.’ – New York Times

‘The best evocation of a country since Laurie Lee’s.’ – Daily Mail