How and why the United Kingdom sponsors conflict around the world 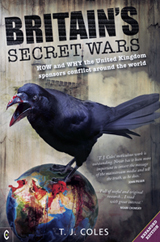 In a devastating analysis, T. J. Coles reveals the true extent of Britain’s covert foreign policy that supports war, conflict and oppression around the world. Unbeknownst to the broad population, the Shadow State sponsors a ‘new world order’ that allies Britain with America’s quest for global power – what the Pentagon calls ‘Full Spectrum Dominance’. Coles documents how British operatives have interfered in Syria, Libya, Iraq, Iran and Yemen with the aim of deposing unwanted regimes. In doing so, they have helped create extensive terrorist networks across the Middle East, reviving previously-failing Jihadist groups such as ISIL, which has now transformed into an international terror franchise.

In addition to waging clandestine wars in the Middle East, the secret services have used the military to run drugs by proxy in Colombia, train death squads in Bangladesh and support instability in Ukraine, where NATO’s strategic encroachment on Russia is drawing the world closer to terminal nuclear confrontation. Coles unearths Britain’s involvement in the recent ethnic cleansing of Tamil civilians by the Sri Lankan government, the invasion of Somalia by Somali and Ethiopian warlords, and Indonesia’s atrocities in Papua. He also exposes the extensive use of drones for murder and intimidation across the Middle East and elsewhere.

Britain’s Secret Wars is essential reading for anyone who wants to dig beneath the surface of current events. This expanded edition features a new Preface.

‘Full of useful and original research... I read with great interest.’ – Noam Chomsky

‘T. J. Coles’ meticulous work is outstanding. Never has it been more important to invert the message of the mainstream media and tell the truth, as he does.’ – John Pilger

‘An important work in that it brings many of Britain’s secret wars, with their war crimes and other atrocities, to public attention... The bulk of the evidence... comes from the government’s own records... [Coles lays] it out, like portraits on a gallery wall, for us to peruse.’ – Professor Jeremy Keenan, author of State Crime

‘The slap in the face this book should give to those of us engaged in debates over British foreign policy is an important part of awakening us to the struggle.’ – Dr Matthew Alford, author of Global Fault Lines

‘T. J. Coles reveals the crimes that are being committed in our name across the world. An essential resource for anyone who wants to know what is really going on.’ – John Newsinger, author of The Blood Never Dried

‘Enormous achievement... What’s really impressive is the evidence amassed to confirm that the power-nexus – the political establishment, the City, the media, the MoD, plus Big Oil – just keeps tightening its grip on our collective throats.’ – Graham Hurley, creator of the DI Faraday series.

T. J. COLES is a postdoctoral researcher at Plymouth University’s Cognition Institute, working on issues relating to blindness and visual impairment. His thesis, The Knotweed Factor, can be read online.

A columnist with AxisOfLogic.com, Coles has written about human rights and politics for a number of publications, including CounterPunch, Newsweek, New Statesman and Truth-out. His books include Manufacturing Terrorism, Fire and Fury, President Trump, Inc., and The Great Brexit Swindle.

Published in the UK by Clairview Books, 3 December 2018