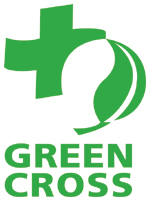 GREEN CROSS INTERNATIONAL (GCI) is an independent non-profit and non-governmental organisation that works to address the interconnected global challenges of security, poverty eradication and environmental degradation through a combination of high level advo- cacy and local projects. GCI is headquartered in Geneva and has a growing network of national offices in over 30 countries.

The call for setting up a `Red Cross' for the environment was made during the 1992 Earth Summit in Rio. Having stated that `after the fall of the Berlin Wall the most pressing challenge for humanity relates to the relationship between man and nature', former Soviet President Mikhail Gorbachev was asked to lead this effort and became the founder of Green Cross International.

MIKHAIL GORBACHEV, born in 1931, was General Secretary of the Communist Party of the USSR from 1985 to 1991. As head of state he introduced the radical turnaround of his country's foreign and internal policies which led to a complete transformation of the Eastern Bloc and Europe. He was awarded the Nobel Peace Prize in 1990, and in 1991 resigned as Head of State. He became President of the Gorbachev Foundation in 1992, and since 1993 he has been President of Green Cross International. He is the recipient of numerous awards and the author of many publications including Memoirs and Manifesto for the Earth.