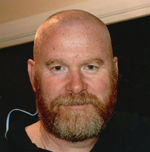 STEPHEN WYNN was born in Leeds in 1958. He has been a police officer since 1983, specializing twice during his service: first for nine years as a member of a specialist firearms unit and, for the last eleven years, as youth liaison offer working to keep youngsters away from criminality.

For the past seven years he has been married to Tanya, his partner and best friend, and they live in Essex with four very lively German Shepherd dogs. Stephen has three children: Luke aged 23 and Ross aged 22 – both currently serving in the military – and Aimee, who is aged 10.

Stephen's main hobbies are football (he supports Leeds United Football Club) and writing (he has several fictional projects in various stages of development). He describes himself as a straightforward and uncomplicated person.

add to basket     TWO SONS IN A WAR ZONE