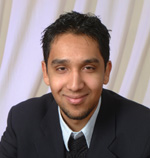 NAFEEZ MOSADDEQ AHMED is an author, human rights activist, and political analyst specializing in the study of conflicts. Born in London, England in 1978 of Bangladeshi parents, he is Executive Director of the Institute for Policy Research & Development, an independent, interdisciplinary think-tank (www.globalresearch.org). Ahmed was a researcher at the Islamic Human Rights Commission (IHRC), a UN-affiliated NGO. He was also an IHRC delegate to the United Nations World Conference Against Racism in 2001, where he delivered a paper on the Israel-Palestine conflict. He is the author of a variety of reports on human rights practices, as well as a best-selling book, The War on Freedom, published in English, German and Italian.

Ahmed's work on the history and development of conflict in Afghanistan has been recommended as a resource by leading universities, including Harvard and California State. He was recently named a Global Expert on War, Peace and International Affairs by the Freedom Network of the Henry Hazlitt Foundation in Chicago, and is a member of TRANSCEND, the international network of scholars specializing in peace and conflict resolution. His archive of political analyses, published on the Web by the Media Monitors Network, has been nominated a Cool Site on the Netscape Open Directory Project. Ahmed appears regularly on radio shows in the U.S. as an expert on US foreign policy. He lives in Brighton, England, with his wife and daughter.

add to basket     BEHIND THE WAR ON TERROR